How The Anonymous Hacker Group Took Down The FBI’s Site

Hacker group Anonymous coordinated ~5,600 people to attack and bring down the websites of the Department of Justice, RIAA, MPAA, Universal Music Group, the US Copyright Service, and the FBI yesterday evening. 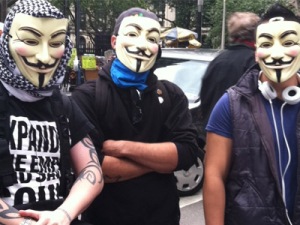 The attack, called #OpMegaUpload, was the largest ever by Anonymous. The name references the FBI’s takedown and indictment of file-sharing site Megaupload, which was what provoked Anonymous.
Mother Jones reporter Josh Harkinson dove into chat rooms to find out more about it.
Apparently, the attacks were organized in old-school Internet Relay Chat chatrooms, which help maintain users’ anonymity, and there hackers organized the distributed denial of service (dosing) assaults.

Harkinson spoke to one hacker, who said they launched the operation because:

«Taking down megaupload was another bad attempt at fighting piracy. Putting a webmaster in jail because the users of his website posted copyrighted material is outrageous. … [Thanks to SOPA and PIPA,] a lot of people really fear the end of the internet as we know it … They cannot ignore us now.

Meanwhile, Megaupload is preparing to defend itself against accusations that it is a huge criminal enterprise. The arrest of Megaupload founder Kim Dotcom apparently played out like a movie, with Dotcom retreating deeper into his enormous mansion and activating layer after layer of security.