CHICAGO – A Greek tragedy is typically composed of three acts. The first sets the scene. It is only with the second that the plot reaches its climax. For current-day Greece, the imposition of “voluntary” losses on the country’s private creditors represents just the end of the beginning. The real tragedy has still to unfold. 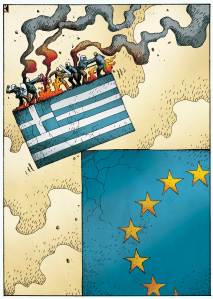 On the face of it, the “voluntary” arrangement with creditors might appear to have been a big success. The volume of Greece’s foreign debt has been reduced by more than €100 billion ($130 billion). Greece’s European partners have provided €130 billion in new loans. As a result, Greece has avoided generalized bank failures, and it has been able to continue paying its public employees.
But, despite these trumpeted results, the reality is much harsher. Even with the latest deal, Greece’s debt ratio remains at 120% of last year’s GDP. With a projected drop in GDP of 7% this year and a sustained deficit, the debt ratio would exceed 130% before stabilizing at 120% in 2020.

But even this reduced level is not sustainable. With its population set to contract by 0.5% annually over the next 30 years, even if per capita income in Greece were to rise at the German rate of 1.5% per year, the debt would be difficult to service. Assuming that Greece could borrow at a real interest rate of only 3% (the current level is 17%), the government would need to run an annual 2.6%-of-GDP primary budget surplus (the fiscal balance minus debt-service costs) for the next 30 years just to keep the debt burden stable.

If the situation is so dramatic, why are the European Union and the International Monetary Fund celebrating the recent agreement? Simply put, these institutions’ primary objective was to minimize the repercussions that a Greek default would have on the international financial system. Greece, frankly, was not their priority.

Given the reaction in financial markets, they have succeeded. The delay in reaching an agreement enabled most private creditors to escape the consequences of their reckless lending to Greece. Roughly half of Greece’s external debt migrated from the private sector to official institutions.

But the group of lenders that the EU and the IMF wanted to help the most – the banks – only partly reduced their exposure. Between May 2010 and September 2011, the value of Greek sovereign debt held by French banks dropped by €4.6 billion (39%), while German banks reduced their holdings by €2.9 billion (31%) and Italian banks by €530 million (30%). In part, this drop reflects the reduction in market value of the existing liabilities. Thus, on average, banks have sold very little.

But, while private-sector losses have been minimized, at what price? Had Greece defaulted on its debt in 2010, imposing the same “haircut” on private creditors as it has imposed now, it would have reduced the debt-to-GDP ratio to a more manageable 80%. That would have been painful, but it could have spared the Greeks from a 7% decline in GDP and a rise in unemployment to 22% (including an increase in youth unemployment to a whopping 48%).

More importantly, a default in 2010 would have left some room for adjustments. Under the current plan, there is none: if the economy does not turn around quickly, Greece will need more help. But where can it go now to find it? Most of the sovereign debt is now held by the official sector, which traditionally does not allow any haircut. The remainder has been reissued under English, not Greek, law, putting it outside of the control of the Greek government and its new collective-action clause, which facilities partial defaults.

In other words, Greece has exhausted its ability to share part of the burden with the private sector. Next time, Europe’s taxpayers will be on the hook.

The second act of the Greek tragedy will cast desperate Greeks against angry and disenchanted Europeans elsewhere. Only at the climax will we know whether the effort to delay the inevitable contributed to undermining the idea of Europe for the current generation.